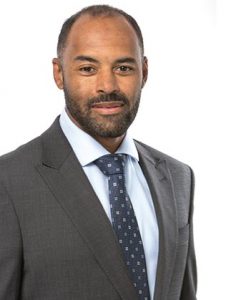 Carlton graduated from the US Naval Academy in 1995.  He served as a Surface Warfare Officer first aboard the destroyer USS THORN (DD988), and then aboard the guided missile cruiser USS ANZIO (CG68).  Carlton made numerous deployments to the Caribbean Sea, to the North Atlantic and North Sea with NATO, and twice deployed to the Mediterranean Sea and to the Arabian Gulf.  His final tour of duty was with Naval Air Systems Command as project manager for Advanced Tomahawk Missile Weapons System.

Carlton completed his MBA from University of Maryland in 2002 and transitioned from Naval service to spend 17 years at Goldman Sachs working in the Technology, Finance and Risk Divisions before joining his current employer, Bank of New York Mellon, as the Technology Risk Officer for Investment and Wealth Management.

Carlton continues his service as a Blue and Gold Officer, as a member of the US Navy League Central Jersey Council Board of Directors and as the Scoutmaster for North Brunswick Township’s Boy Scout Troop.  He fulfils his passion for Naval history as a SCUBA diver with an international underwater archeological team operating in Greece.  Carlton is also a marathon runner, and the father of three wonderful daughters.